What happens when you go into labor and are giving birth 20 minutes later? Check out our 6th baby’s birth story. 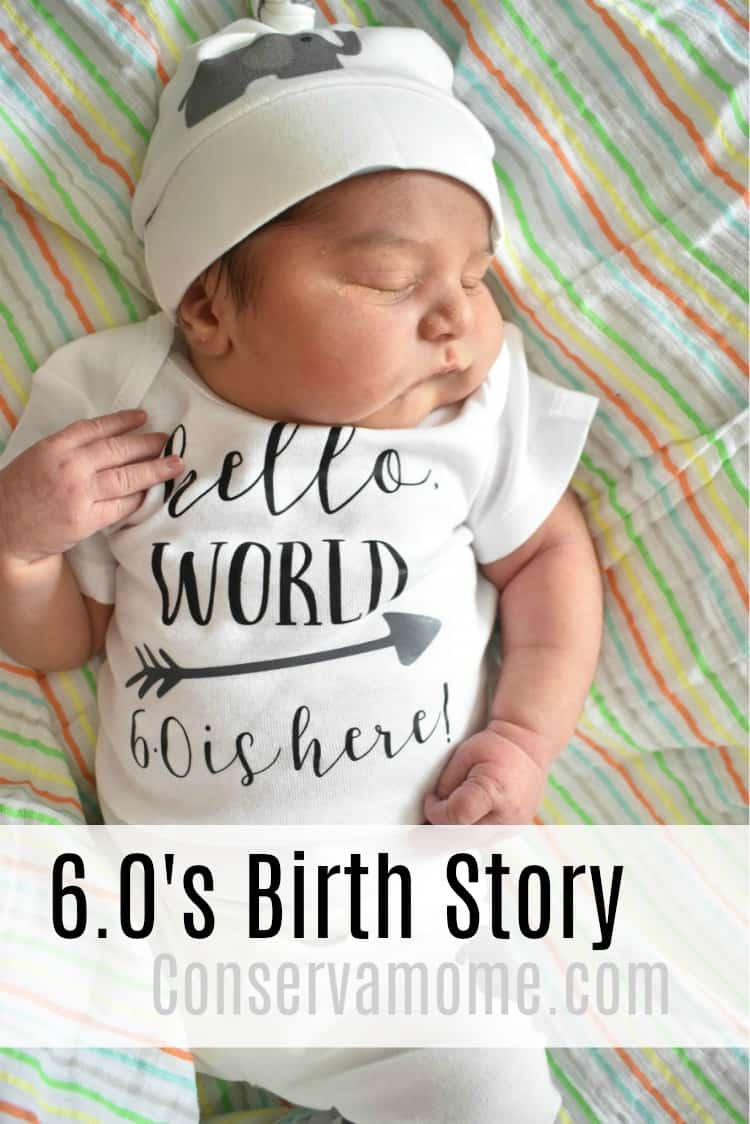 Today would have been 6.0’s Due date. However, when you have 6 kids there’s always room for some excitement and excitement we’ve had with the arrival of Nicholas Salvatore (aka: 6.0). As some of you have guessed this was my #6. My first 3 were very standard deliveries in which the first was the typical 1st baby that took a million hours to be born, but was delivered finally after 4 hours of pushing at a sturdy 8#11oz.

That birth killed me but for some reason I forgot and ended up pregnant with #2, 9 months later. #2 & #3 were pretty easy deliveries although induced they came rather quickly.

However, those two were the last I used an epidural because by #3 it didn’t even work. If you search around you can also find 4.0’s Birth Story and 5.0’s as well.  That being said 6.0 was a very interesting birth because of how different everything happened and how we almost didn’t make it to the hospital. So read on to find out what made this birth an exciting one.

His Birth story really began around week 35 when my Doctor who was “concerned” with me being a geriatric patient (I’m 37) had me do an ultrasound to see if everything was ok. Turns out 6.0 measured in at 8#15oz during this ultrasound quickly sending my doctor into panic mode.

If you’ve seen my other stories and followed me you know I give birth to big babies. My last one weighed in at 9#8oz. Ironically enough the last two were born on their due dates. So when they told me he was weighing 8#15oz at week 35, I’m not going to lie I may have freaked out a bit. If you followed my instagram you were well aware of the sheer size of my stomach. Being that I’m 5’3 you can imagine how exhausting this was for me.

I’ve had a few people ask for a pregnancy shot so here it is. Better late than never! So bets are on, boy or girl? #36weekspregnant #noimnothavingtwins #teamgreen #pregnancy #thirdtrimester #waitingforbaby Also check out the awesome quality of my @republicwireless phone pictures! Thankfully since their service is so fantastic uploading it was a piece of cake ❤️#sentwithrepublicwireless #ad

So honestly this whole idea of the baby being big wasn’t a surprise. During the appointment I did point out to the doctor that I had been having some pretty heavy contractions, so she decided to check me to see if I was dilating. Lo and behold it turns out I was 2 Centimeters dilated.

This is very unlike me, I don’t start dilating until at least a week before I deliver. So this threw me for a curve ball. So much so I had my mom fly in from Miami because I was concerned that I would go into labor early. Thank God I did. Week 36 came and I went in for another check up and I was dilated to a 3 1/2. I know for many they will spend weeks like this but this was very unlike me.

So on Wed August 30th (37 weeks 2 days) I had an appointment scheduled with the Maternal Fetal Specialist because of the size of the baby. After a stressful appointment in which I was told about the risks of the size of my baby and an ultrasound that told me the baby was weighing in at 11#’s. I was pretty much told I couldn’t deliver a baby that size and pretty much the baby could get stuck. However, going into the appointment I had been feeling sick since the night before, and kept having contractions.

Nothing steady but enough where I was incredibly uncomfortable. So he told me to come back next week and they would schedule a C-Section. I left the appointment so upset, stressed and pretty much in tears. This is my 6th baby, I’m not supposed to get a curveball like this..right?lol  Well I left the appointment and was still feeling crappy and so called my best friend who talked me down from my anxiety attack. (Thank God for a Village).

I went home and took a nap and  continued to get things ready for the baby because well, what else could I do. That evening I made dinner for the kids and hubby got home around 7:30. At that point I was getting stronger contractions, the kind that made me stop but weren’t the kind that knocked you off your feet. They were however extremely sporadic so I figured it was just a pre-event.

So I went to bed and around 11:30 my husband came into the room dying. Apparently he fell asleep after eating dinner that was washed down with milk and cookies (not a smart choice for a 40 something dude) well the cookies must have settled horribly in his stomach because he was in grueling pain.

I’m pretty sure it was gas but he was dying. So I asked him if he needed to go to the hospital because I’m thinking OH God is he having a heart attack or something.

Well as soon as I mentioned the word hospital I noticed that my contractions were starting to get stronger and as he’s in the bathroom suffering for dear life, I started timing them only to realize that they were coming 4 minutes apart. This was around 12:30 and I told hubby um… I think we have a problem. I need to call the doctor.

So I called my doctor who THANK GOD was on call, and said I think you better come in. Of course, my husband is still “dying” and can barely walk. I’m at the point where every time I get hit with a contraction I can barely walk. We were a real duo folks.

Everything happened so quickly!

We arrive at the hospital at 1:30. I can barely walk and THANK God the security guard was waiting with a wheel chair. We take what feels like an eternity to make it to the room where the nurse is waiting for me.

She sends me to go change into the horrible hospital gown we all know and love and I immediately get the urge to go to the bathroom. I’m in there and I’m feeling horrible. The nurse walks in and asks if I want an epidural which I say no to because I’m going to try to tough this out like the two other times.

As I walk to the bed I get the urge to go to the bathroom again and my husband whom seems to have gotten his act together tells me don’t do it, I have a feeling we’re having a repeat of 4.0. Of course the poor guy is still standing there pale faced and the nurse asks him if he’s ok.

I look at him and say “are you kidding me! ” I’m in labor! He looks at her and says umm I had some bad milk and cookies but don’t worry about me because my wife will kill me if I take over this show. The nurse laughs and has someone bring him some powerade. Which somehow starts helping him get some color back in his face.

As this is all happening the Resident walks in and introduces herself and says she’s going to check me. As I somehow climb into bed and have her check me I see her face change into an “Oh Crap” look and she looks at the nurse to say she’s at a 9, get Dr.Devita. So within seconds the whole room becomes chaotic.

A million people appear out of nowhere and I suddenly get the urge to start pushing. I tell them I have to push, and they’re all running around and My doctor is nowhere to be found.

Quickest Labor and Delivery of a Big baby!

The funny part is that this all felt like it took 8 hours to happen but the doctor finally shows up only to yell to the nurse that this is a big baby and get the anesthesiologist ready and the ER ready for an emergency C-section. I see my husbands face go white and I turn to him and say “you better start praying.” Then I begin to push, and 4 pushes later at 1:52 am 6.0 was born! 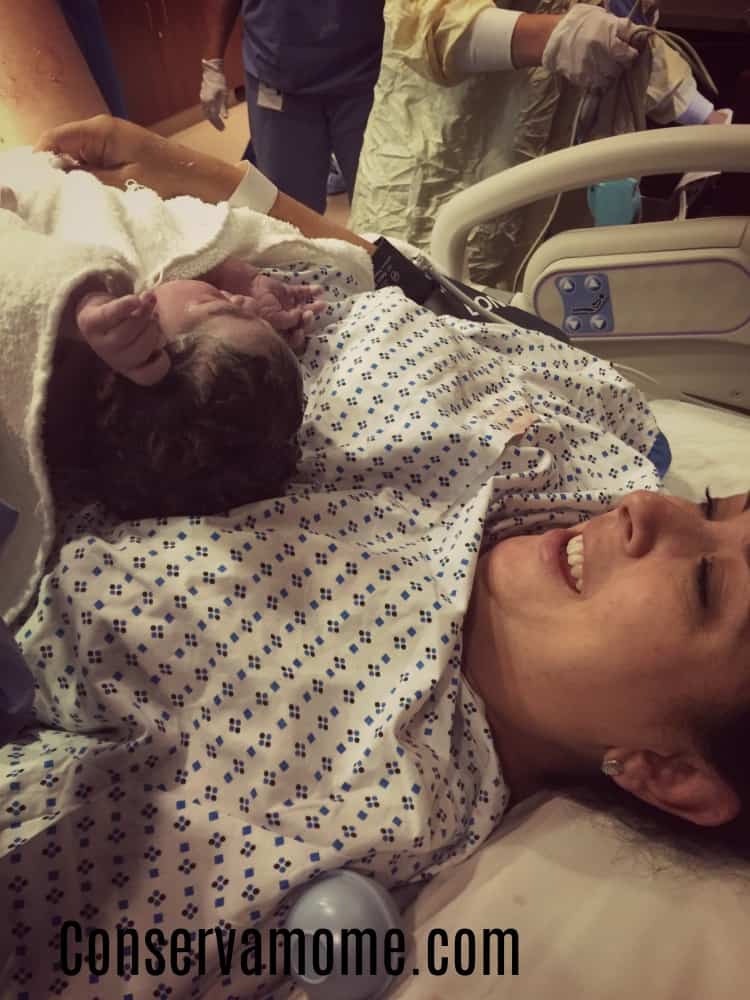 Delivering a 10 pound baby in less than an hour!

At a whopping 10#’s.  I couldn’t believe how fast he came out! Not only that but it was such an incredibly easy delivery and I only needed a couple of stitches. I have to say I really do credit my doctor because she kept me focused and kept massaging my perennial during birth which I know helped tremendously.

She was so focused and calm that it kept me calm. You would never think that a 10 pound baby would be an easy birth but good grief not only was he born in less than half an hour but I felt fine right after. 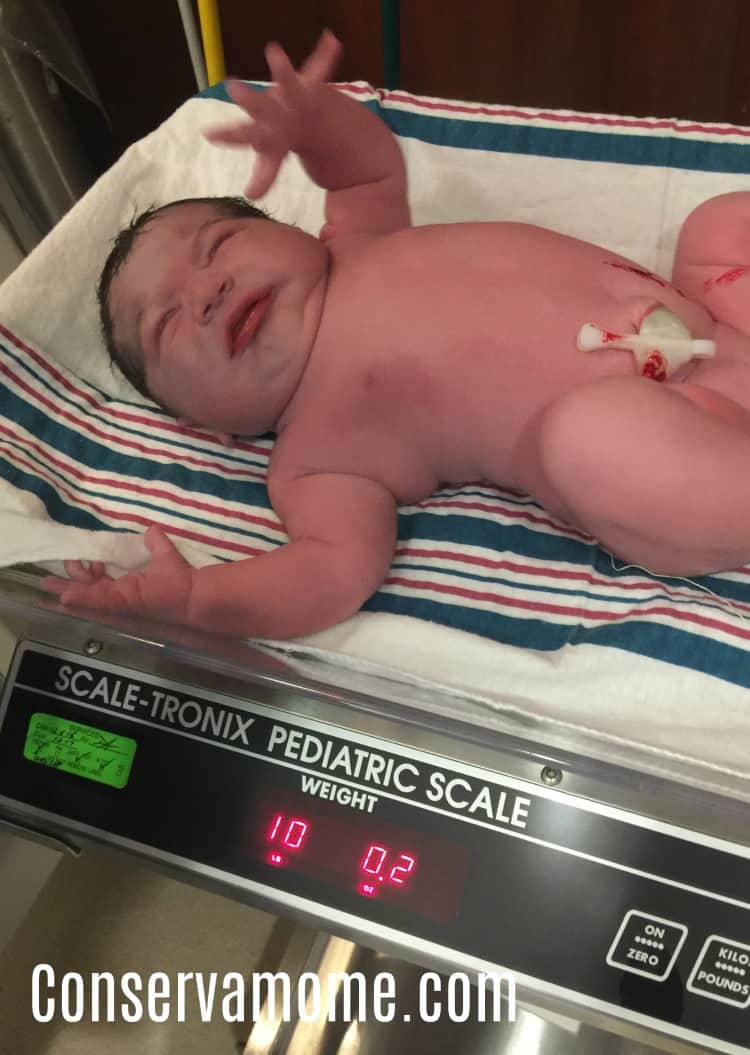 It turned out I was positive for strep b, but because his birth was so quick they just had to monitor me for 48 hours to make sure he was ok. 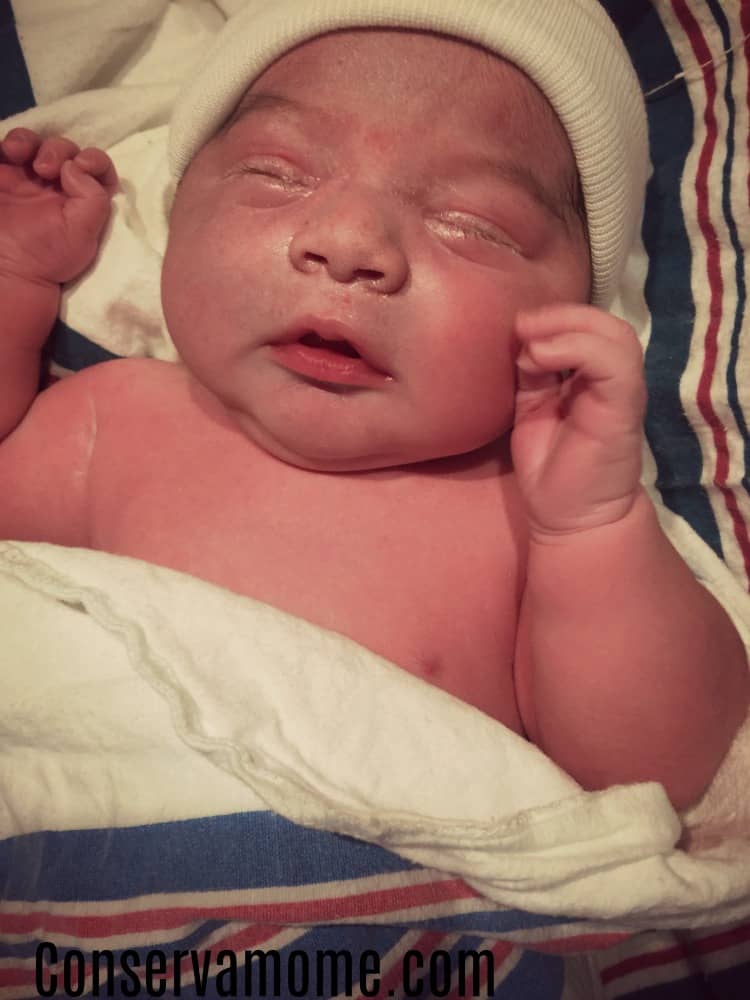 That morning my kids came to see him. We had the traditional Baby Gifts I always have for them when a new baby is born. My kids are hilarious and the younger ones think the baby actually brings it with him/her in my stomach. 4.0 pointed out that my stomach was so big because the baby had those presents with him. 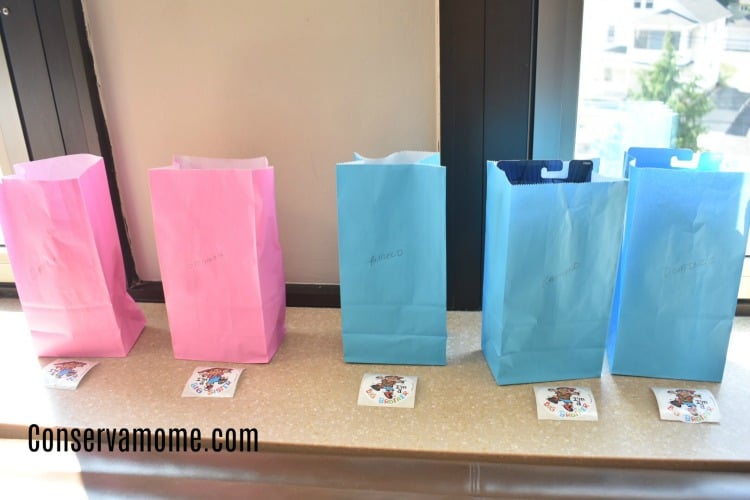 Of course everyone was so in love and excited with the new addition to the family…. 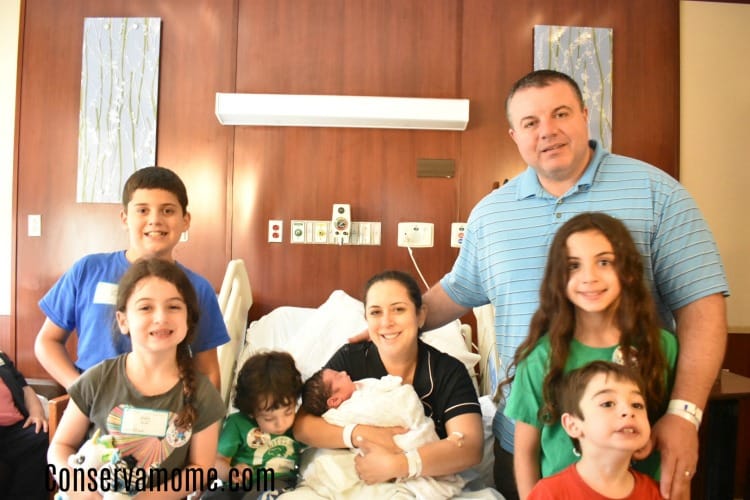 When you realize you’re no longer the baby ??. #lifewithatoddlerandbaby #newbaby

The baby is still a few weeks old, that being said I can’t believe how much joy he’s brought to our lives!   He’s such a sweet little man. I have to continuously pinch myself when I realize I’m the mom to 6 amazing kids. Having children isn’t everyone’s thing, let alone having 6 kids. But my goodness this little man is amazing. This makes me so happy we’ve opened our hearts to having this big beautiful family.

Things my sixth pregnancy taught me

This pregnancy has taught me a few things including to trust my body and listen to the stuff going on. Also, you need a good doctor behind you especially during labor. I was blessed that mine was so great and knew her stuff.  Most important to have faith in what I’m capable of doing.

Giving birth to such a big baby was scary . But after the initial spaz attack I realized freaking out wasn’t going to help and staying in control was important. Our bodies are amazing and you will be blown away at what you can achieve. Whether it’s through C-section or Vaginal Birth your body just created an amazing little being. That alone is total amazement.

Finally, the biggest lesson of them all..make sure your husband doesn’t fall asleep after eating cookies and milk because it will make for an interesting time. 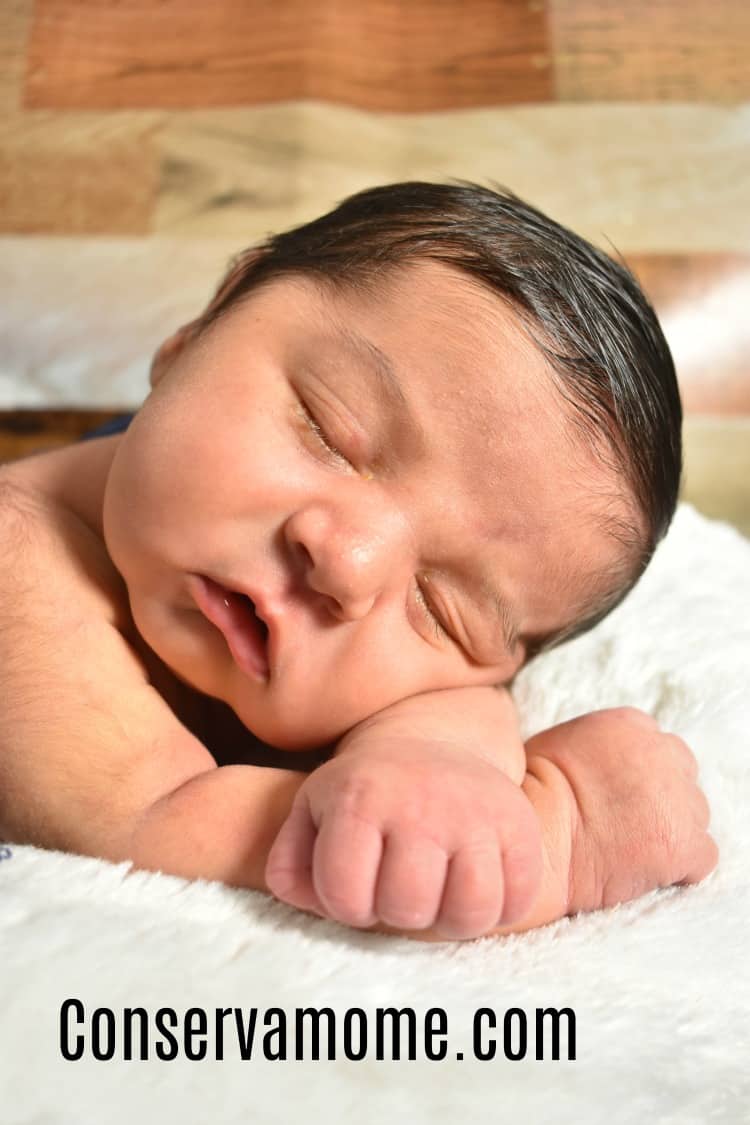