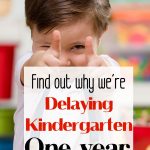 Have you been toying with the idea of delaying kindergarten? Find out the Reasons we’re redshirting our child from Kindergarten and reasons we’re delaying school for him. 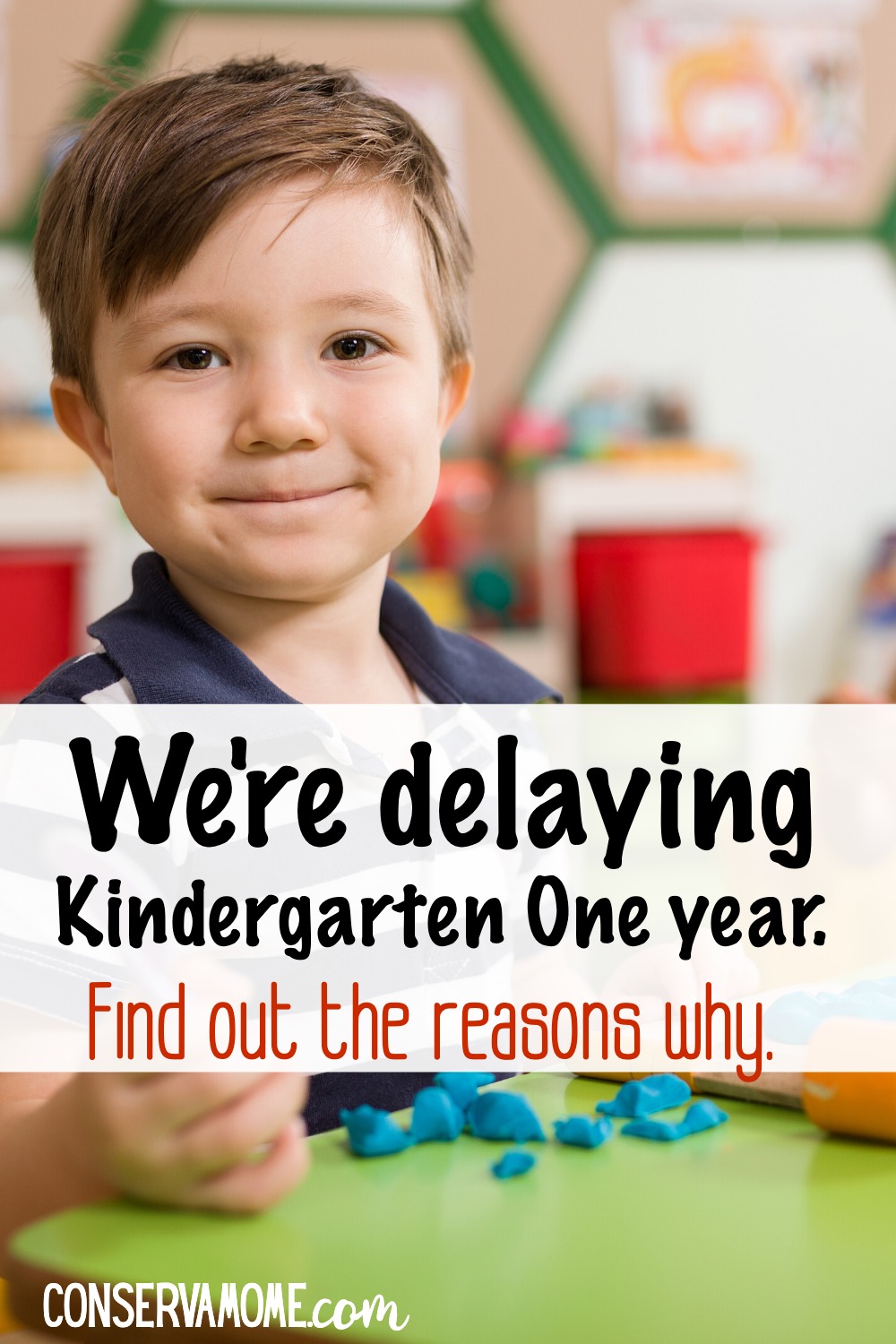 Times have changed and so has school.

Next year 5.0 is supposed to be starting Kindergarten. His Birthday is at the end of June.  If you would have told me a few years back I would be considering redshirting my kindergartner , I would have thought you were crazy. However, one day as I began researching information on getting him ready for Kindergarten I realized the time just wasn’t right.

I don’t know why I began to feel this way but I did know that he needed that extra year just to solidify and grow in confidence in order to tackle what was to come.

At first I thought it was just me being a paranoid helicopter parent. But then I realized it wasn’t that, but it was the experience I had been through with his older brother that made me realize this decision was necessary.

Every state has a different Birthday Cut off

You see in Connecticut the cut off was December 31. Here in Pennsylvania it’s August 31. 4.0’s birthday is Mid october. So when I placed him in Kindergarten before his 5th birthday I realized early on what a disaster that was.

He ended up doing Kindergarten again the next year. Thankfully now,  he is on course thriving and doing his best this year as a First grader. All because he did Kindergarten twice.

I know his situation was different but it made me realize how challenging Kindergarten has become. Even more than when my 13 year old was in Kindergarten. Children are expected to know quite a bit going into Kindergarten. They are to have a solid understanding of letters and their sounds, numbers 1-20, rhyme, Write their name, know their address and phone number,and  cut to name a few things.

Not only do they need to know those basic Academic skills they also need to have some social skills that are necessary for their success. Many are age appropriate but others come a little harder to some children. Especially those that may not have gone through Early Childhood programs since they were little.

Why we chose to delay kindergarten

5.0 is a very bright little boy, however, I was looking at the bigger picture. How emotionally ready is he to head to school? How will he react to the confines of a classroom that is expecting so much from him? Will he be able to handle the emotional separation from what he knows?  Being the child of immigrants who did what you were supposed to, I would have said, tough it up buttercup and sent him to school. But is that really the best for him?

Part of me also felt a bit embarrassed because I don’t want others to feel like my little boy isn’t bright,because hey aren’t the smartest kids the ones who know everything early on?

Taking all that he knows, his emotional well being and the overall picture made me realize we would be sitting out one year. That coupled with some great studies on the benefits of delaying Kindergarten 1 year  made this decision an easier one for our family.

As a parent I question every decision I make, whether to make my son stick to Boy Scouts. If I should let my daughter take ballet instead of soccer.  Less screen time, more veggies etc..

It feels like no matter what decision I make with my kids I have second guessed it all.  Except for this one.

For the first time in my parenting years I felt like this was one decision I was incredibly secure in.  My husband was a little more doubtful because he’s a product of the 70’s/ 80’s and holding back a kid just because you think it’s the right thing to do isn’t an option.  I don’t even know if he’s a 100% on board but is supporting my decision because of my Educational background.

One important factor that led to my decision is my commitment to keeping things up on my end with enrichment activities that will help maximize this upcoming year so when he does begin school, he’ll be ready.

I’m not talking about having him learn the Canterbury tales, I’m talking about good old play learning that will help maximize the fun. From  hands on  experiments, Visit to fun and educational places like Legoland,  Sensory play and most important free play.

I plan to make sure this is a year of grown and readiness but most important fun. 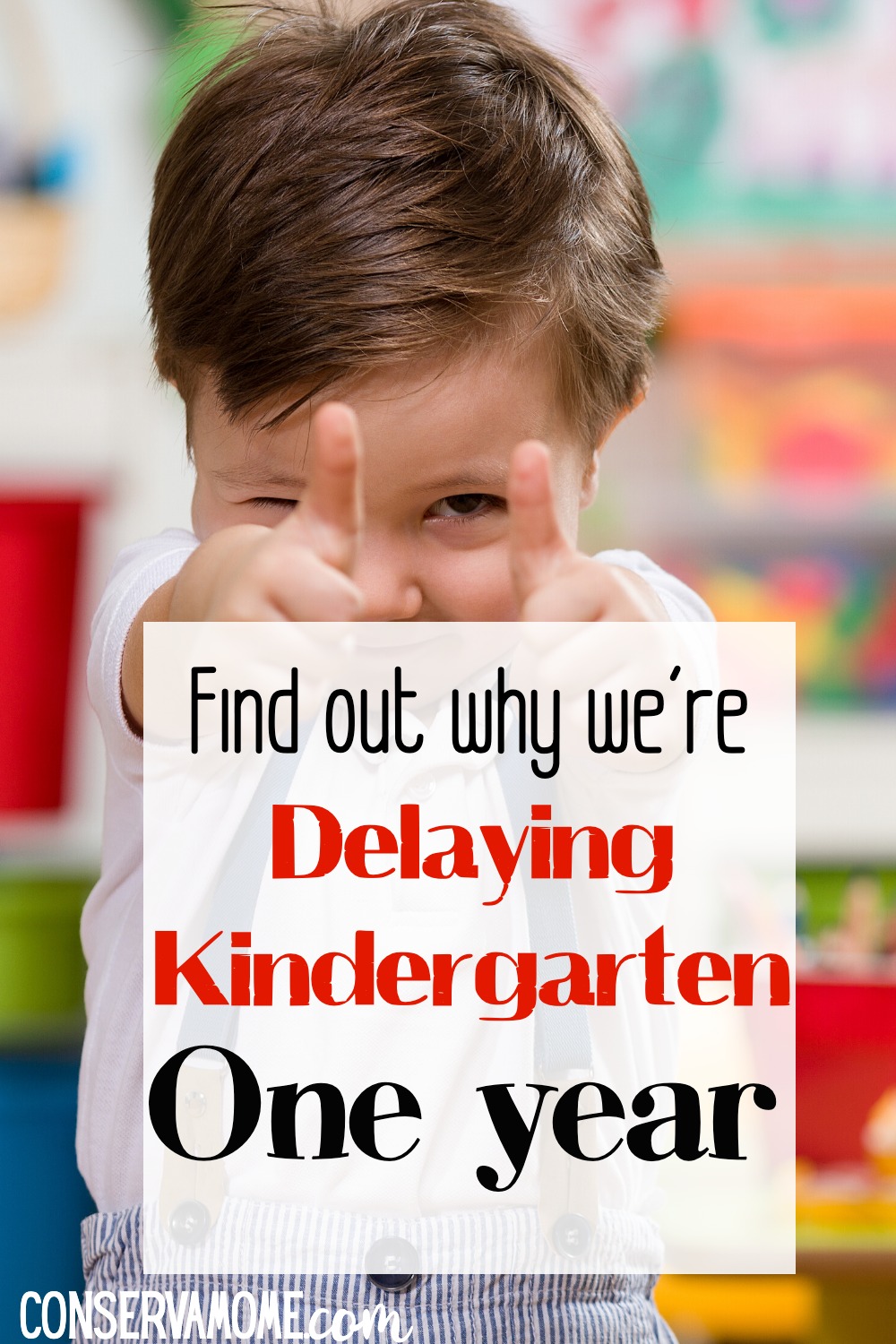 We want kids to grow up so quickly.

Honestly, even though all the studies, suggestions from respected educators I know and my own gut feeling, one final reasons is because I want to give him one more year of being my little boy.

I remember being a first time mom I was so ready for my  oldest son to hit the Kindergarten milestone. Whether he was ready or not. It was a necessary part of life. But looking back now I ask myself why was I in such a hurry.

These kids will be in school for 13 years. It’s inevitable.  I see how they come home exhausted, overworked and drained. School is so much all the time. From standardized tests to Common core Math even I can’t figure out at times. Although my kid’s school does an amazing job at making it fun, it’s still a lot of work.  A lot of stress. Most important a lot of pressure that won’t end until they’re in college and honestly does it ever?

Reasons not to delay Kindergarten

Delaying Kindergarten is definitley not the right decision for every family. There are actually children who may not benefit from this and may even  do worse by redshirting. There are kids who even though tend to be inattentive, are extremely bright. Holding them back might make them bored creating behavior issues. Also if your child has a group of friends that they are close to and they’re all moving on to Kindergarten, leaving them behind may definitley be more devastating than not.

For some parents, financially it may not be an option. Because we’re holding off one year, we’re putting 5.0 in a fantastic preschool program. That being said, it’s going to cost us over a hundred a month to send him there. We have the economic means to do it, but not everyone does and so that isn’t an option. When we lived in Connecticut most preschools there were close to 500 a month. Making it impossible for many not to do this.

I know there are a lot opponents stating that this is an ” upper middle class problem” and that lower income kids just don’t have the ability to pay for an extra year of preschool because of working parents. The fact that Kindergarten is free is also a huge factor.

That being said here in Pennsylvania Kindergarten is still a half day program which means you’re going to run into issues regardless. Many parents still end up having to pay for private Kindergarten or childcare so that wasn’t an issue for us.

Alternative options to Redshirting in Some states

There are states that have amazing benefits for preschoolers. In Florida they have the VPK program. A program one of my daughters took advantage of and was super beneficial to her. They were actually one of the first programs to offer this benefit to 4 year olds. This  free prekindergarten to all 4-year-olds is for kids who live in  Florida. They have to be 4 years old on or before Sept. 1 of the current school year to be eligible. If their fourth birthday falls Feb. 2 through Sept. 1 in a calendar year, parents can postpone enrolling their child in VPK that year and wait until the following year when their child is 5.

So although they aren’t technically redshirting they are helping parents make this decision themselves. They are also giving them options which is fantastic.

It’s Definitely a personal decision that no one can do for you. I also believe that no matter what you decide it will be the right choice when it comes to delaying Kindergarten one year. In the end I feel like I’m giving him one more year to have fun, one more year to be little, one more year to have him as my own. I’m well aware that the day he begins his journey into Kindergarten that little boy won’t be anymore. He’ll be dealing with pressures he’s never had before. Feeling all sorts of feelings where I won’t be there to help guide him along the way. So for now I’m doing my part to capture him in childhood just a little longer.

Want to find out what we thought of our decision? I was interviewed by NPR. You can check out the interview here!