Find out what it was like to be Disney’s Cinderella from non other than Lily James. This magical remake is a must watch for the whole family and now you can hear strait from Cinderella herself in this lovely interview! 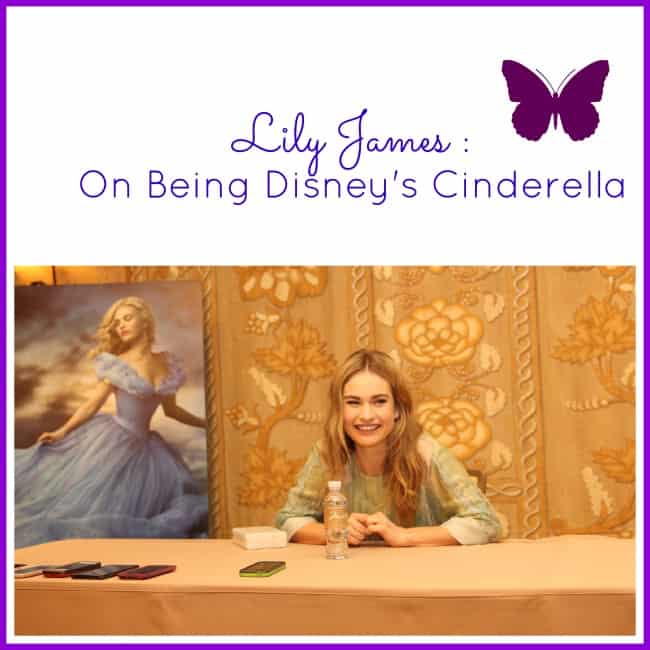 Lily James :On Being Disney’s Cinderella

Many of you have probably followed Lily James and her bubbly personality on Downton Abbey as Lady Rose. Because of her fun personality and beauty it was no surprise when she was cast as Cinderella in Disney’s newest version of this Iconic tale. What I wasn’t prepared for was not only her exterior beauty but interior beauty. 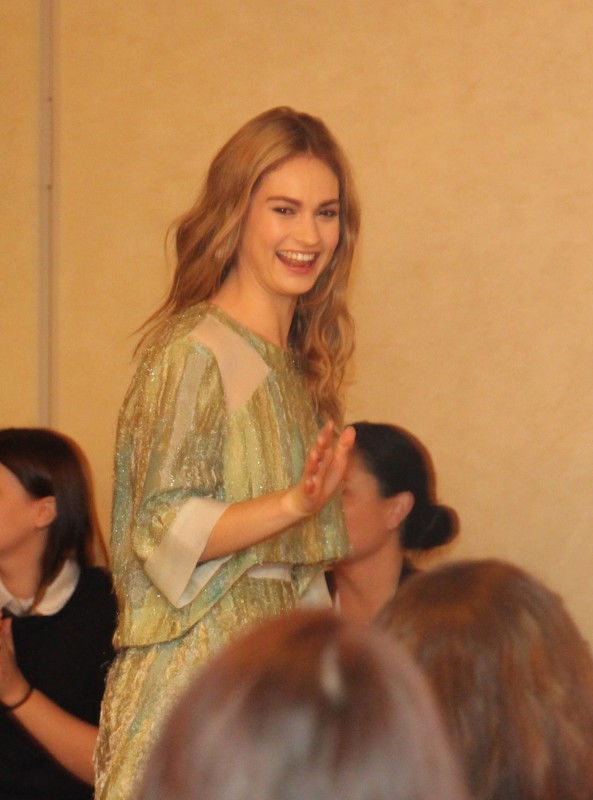 As soon as Lily walks into the room you can tell she’s almost embarrassed at the attention. A gorgeous beauty who almost doesn’t understand the extent of that beauty. Yet, when you begin to speak to her you notice a warmth and sweetness you just don’t expect. This perfect combination gives way for an amazing performance of Cinderella I know you will all love.

Last week I had the opportunity to sit down and interview Lily on her role as Cinderella and it was such a delight to talk to her not only about the gorgeous fashion incorporated into the movie(what girl doesn’t fall in love with Cinderella’s dress & shoes?) But talk about all the fun that happened behind the scenes.

The first question we all had on our minds was Which shoes were you wearing last night (at the premier)? 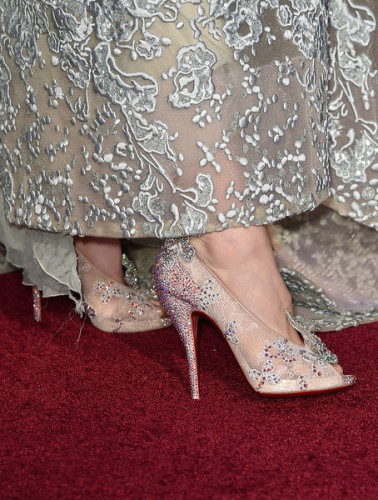 And the answer? Louboutin “Yeah,  I loved that they looked so beautiful and princess-y and then they had the killer red, red sole, it was great.”

How did you prepare yourself, leading up to the beginning of filming to be Cinderella?

“First of all I started horse riding lessons ‘cause I’d never ridden before. When I first met Ken early on after he cast me he was like, ‘so, how do youfeel about horse riding?’ and I was like, ‘[GASP] great, um.’ And, so I started and I had to bare back as well so I was going, every time, every second I wasn’t filming Downton, I was at this farm learning to ride. I also did yoga, to  sort of try and feel in my body and, you know, graceful and breathe properly.  That was all physical and then, then I was just working on the script on back-story. When I met with Ken as well, he was like, ‘I want to know, does Ella sleep with the blinds open or closed, what does she dream about, you know, what’s her favorite food.’ He wanted to know, for me to know all those details so that I could sort of just exist on set being her, you know.” 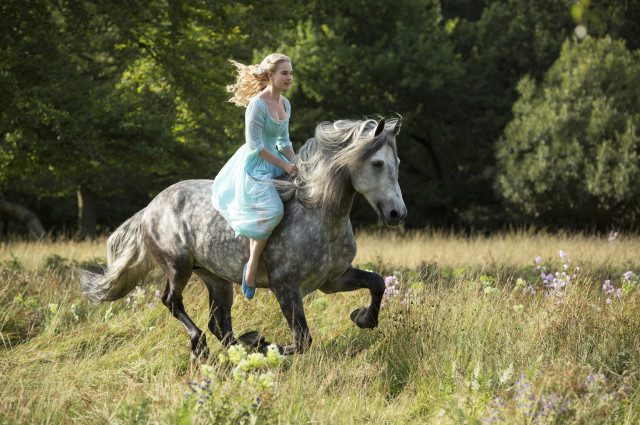 How  would you tell young girls today that your character Cinderella is relevant to them? What is the message that Cinderella has for them today?

“I think with the film being really faithful to the fairytale.  It is a a girl that’s not sitting around waiting for a prince to come and save her. That she’s, she’s got this unbelievable strength and it doesn’t come from fighting or from, you know, what happens, it comes from within. And that she has the strength &  her courage and her kindness and that, if she has that, she can, in a way, deal with, as best she can what life throws at her. Being this person that, you know she’s being the best version of herself. And with such an open heart when she does meet the prince not knowing who he is, he falls for her because she’s a strong, powerful &  beautiful from within woman. That’s the idea.” 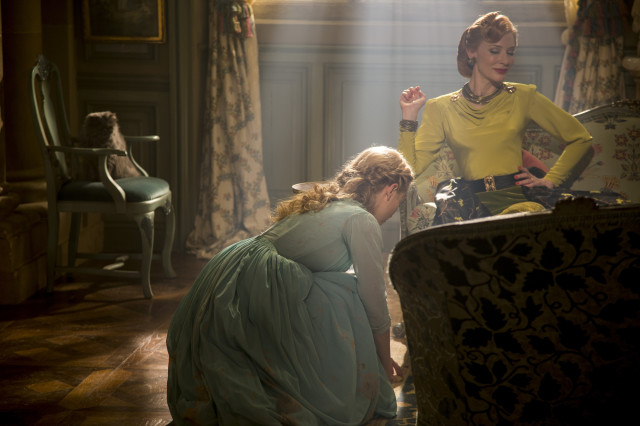 Can  you tell us about, like your experience with the dress? .

“The dress is insane. When I first put it on, it reminded me of the  scene from Runaway Bride with Julia Roberts where she looks, she puts this dress on and she looks in the mirror and, I think Richard Gere is looking really handsome somewhere and she just goes like swoosh, swoosh. She makes this sound and I put it on and I felt like Julia Roberts, it was just the best feeling ever. I was so nervous about this bit of the movie ‘cause it’s the bit where she’s the princess. It’s the moment, you know, and I think, ‘how can anyone live up to that?’ Really, you know, it’s this fairy tale, it’s this sort of thing that’s very far removed from me. And then I put on that gown and I just felt transformed and it felt like a suit of honor. However, it was really hard to wear and it was incredibly tight and basically it had life of it’s own basically It was really heavy. It was like crazy heavy and it pulled down on my waist and it took about twenty minutes to get in and twenty minutes to get out. So in the end me and Helena (The Fairy God mother) had the same problem and we had these port-a-loo’s that we’d like put under us. It was the most unglamorous thing ever. Helena and I would sometimes be, like, in our tent and be next door and be both using the port-a-loo’s at the same time.” 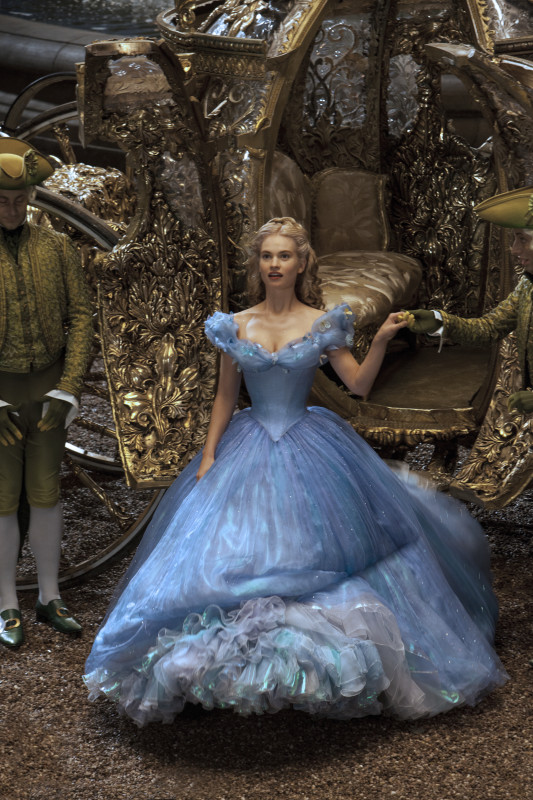 Next to the  dress you think about the glass slippers? Were they comfortable? Were they really made out of glass? Were they?

“They were really made out of Swarovski crystals, so, even more amazing. Um, and they’re so beautiful but, sadly, um, I hate saying this, but, they don’t fit any human foot.”

How did you feel during the dancing? Did it feel like you were really at a ball?

“Yeah, it  switched from being the  most, sort of beautiful, romantic moment of my life, actually and to being one of the most stressful and hardest. Because the dress was so heavy and it ripped if basically Richard looked, it was so delicate. We learned the dance we were getting really smart, we’d been doing it for months at Pinewood studios in London with these incredible choreographer. And  then suddenly they were like, ‘okay, the dress’ and I just, like, almost fainted, I thought, ‘the dress, of course, how are we gonna do this in the dress?’ And I had a complete nervous breakdown. Richard had to ice skate so he didn’t step on it. He had to slide his feet. There was a few takes where we ran it like real time so I would start outside the doors, I’d knock on the doors, I came in, I walked down the steps, the music started, I walked towards Richard and we danced. And, Ken didn’t say it but he let it run right ‘til the end of the whole, like where we run out of the ballroom.”

What was the most emotionally difficult scene to shoot?

“The  stuff at the start was hard and even the stuff  watching with the younger me.Last night, one of the little girls came up to me at the end and she was like, ‘it’s so sad, both your parents died.’ And I was like ‘I’ve got the mice and the prince.’Those scenes were really hard, um, the scene where the farmer comes and tells me the news, there was a bit in shooting when I felt like I was crying all the time.  I felt like, ‘God, is this a fairy tale or is this a tragic drama?”

Your presence of Cinderella is unbelievable. And your composure, it’s so believable you’re a princess. I’m wondering, there’s a lot of us that are big fans of Downton Abbey and we’re  wondering if you’re role as Lady Rose played any part in your  training and such as with all the historic adviser who you are in this film.

“I think that that was set in the period there’s a way that you stand and there’s a sort of an etiquette and a grace.I really wanted her to be from the animation there a few things and one of them was her physicality like I wanted it. In a real way for Cinderella to be graceful and it helped from doing Downton. I also think, in a way because I shot this a year and a half ago so before the final series, which I think just, finished airing last night, right?  And I think, Ella influenced that series of Rose a bit, it was like, Rose became so nice, and I was like, ‘ oh no, have I got them mixed up?” 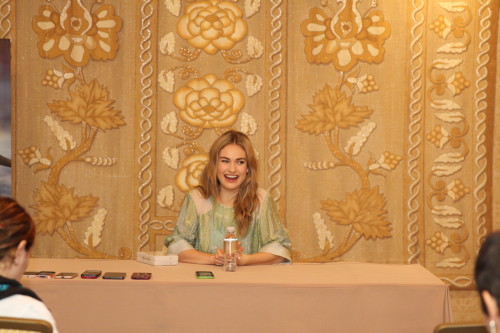 And the dress that you were in the wedding dress, in the end, was amazing.

“That was Sandy Powell. It’s all Sandy Powell. I actually wish that she could do my dress for the premiers last night. I feel like so sad that it was only in the film for like thirty seconds. I told ‘Ken, you’ve gotta shoot it from the back, you’ve gotta shoot it from the back.’ ‘Cause the flowers were hand painted and, you know, the detail that goes into these dresses. And  that veil, and the crown  and actually we did the hair like how Cinderella did in the animation so that was a kind of like little echo. There was a mishap with the  dress,  I was doing a sort of photo shoot in it one day when we were so busy and I rushed in and we did the photos in it at Pinewood Studios . England was cold and it’s miserable and gray and I rushed in, I was so cold and I was walking past this heater and my skirt caught on fire. I didn’t care about myself I was like, ‘the skirt!’ And because it was all hand painted flowers they had to redo, like a whole section of the skirt.” 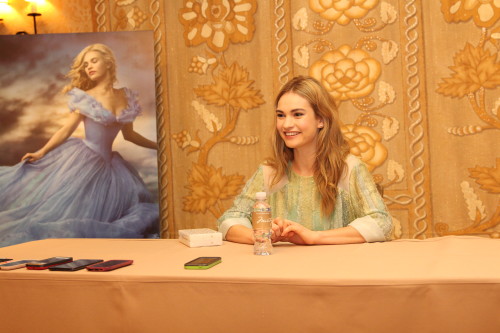 What was your initial reaction when you found out you got the role of Cinderella?

Ken rang me himself and I screamed so loudly  I’m sure I burst his eardrum. He said,“I’d like you, I want you to be my Cinderella.” I  was on set and I screamed. And Laura and Michelle came running over and, and they knew I’d been doing this torturous audition process and they’re like, ‘what is it, what is it?’ And then Ken was like, ‘you’re not allowed to tell anyone.’ So, I was like, ‘oh, nothing,nothing.’ And then, later that day,Hugh Bonneville announced it at the Downton dining room table. It wasreally sweet. 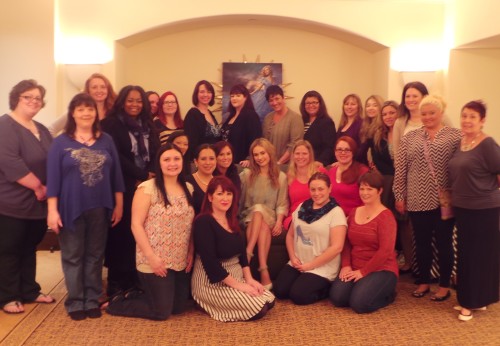