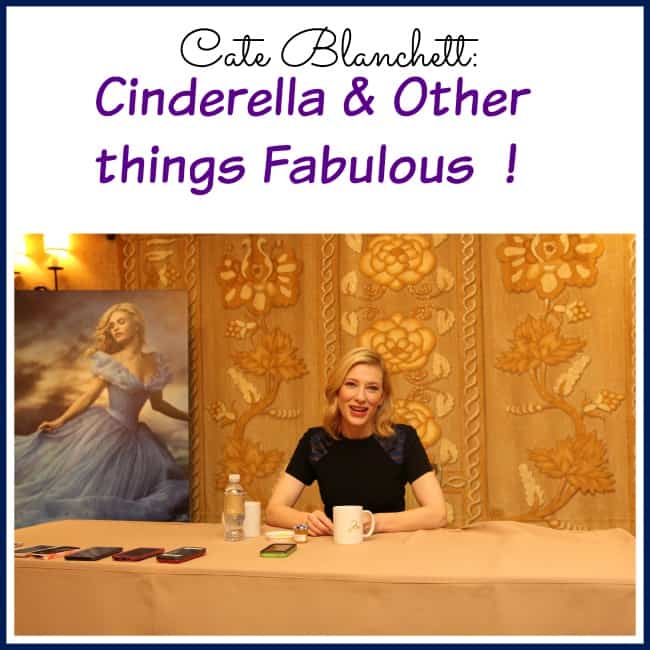 Last Monday I had the opportunity to sit down and interview the beautiful and Incredibly talented Cate Blanchett. I’ve always been a huge fan of hers. How could one not be with her huge repertoire of roles that have made her a legend in her own right. Her presence alone commands an elegance and beauty I imagined but was so impressed to see.  So it was a real treat to see her in person and talk about her role as the Evil Step mother in Disney’ newest (and my most favorite) adaptation of Cinderella which hits theaters this Friday.

Her role as the Step Mother was so amazing and so believable it almost made you dislike her but seeing her walk in you remember how amazing she truly is!

When asked if she went after the role as the step mother she she quickly answered: “Like a Rabid Dog” and then began to laugh.  “I was very lucky, because Sandy Powell and Dante Ferretti were on board, and they’re  two of the greats that have  created such extraordinary visuals in modern cinema. Then  Ken Branagh came on board who’s so fantastic with actors and with language, so it was kind of a perfect, a perfect storm” and when she fell into this role she knew it would be perfect.

There was an awkward pause when she would tell friends about being in Cinderella because they didn’t know whether to ask if she was playing Cinderella. And although she could have her role as the Step mother was fantastic.

Cate’s Favorite Scene couldn’t just be pin pointed to one.

“I think the chemistry between Lily and Richard is palpable, and I wept like a baby, completely inappropriately and out of character when they waltzed for the first time. The, the music is beautiful, but also it was really big feat because Lily was cinched in so tightly, and that dress was like an armored tank, and he was in seven hundred layers of wool, and the dance was really athletic, and they acted like a dream. And the chemistry was, palpable, and I just, I wept because it was beautiful to watch. And maybe being the mother of sons I found it very,very moving & every tie I see it, I do a bit of a cry…a lot.”

“But I also love the scene between,Derek Jacobi as the king, and Richard Madden as the prince. You know, because that’s the wonderful thing about the film, I think is that, you know, we try and shield  our children from moments of grief and I know it from having lost a parent at the age of ten.Children are resilient, and they can handle it better, in a way, it’s harder, I think, to lose a parent, at our age. Well, I mean, I might be a thousand years older than you all,but I found that really moving. I thought for him as a man to be curled up like a young boy, you know, and I’ve had a lot of friends recently lose a parent, and whether you’re eighty or eight and you lose a parent you’re always the child, and so I find that scene very moving.”

How much fun was it to play a Disney villain?

” There’s a lot of great Disney villains, and a lot of them are women that have  fabulous frocks and fabulous hairdos and so it was an enormous amount of fun. You know, the wonderful message in the film, of course is to have courage and to be kind. You know, kindness is a super power, and we try to teach our children, you know, you share, you be respectful, you be generous, you be thoughtful, put yourself in someone else’s shoes, and to play someone who can’t play someone who can’t do any of those things,you know, to have that as your avatar during the day was quite fun.” 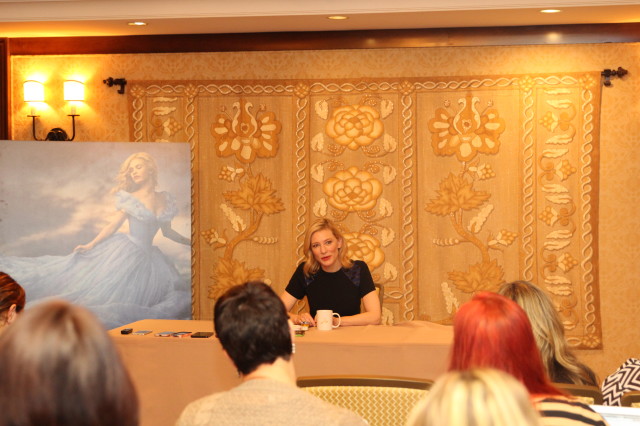 How did you prepare for your role? You’re so evil! 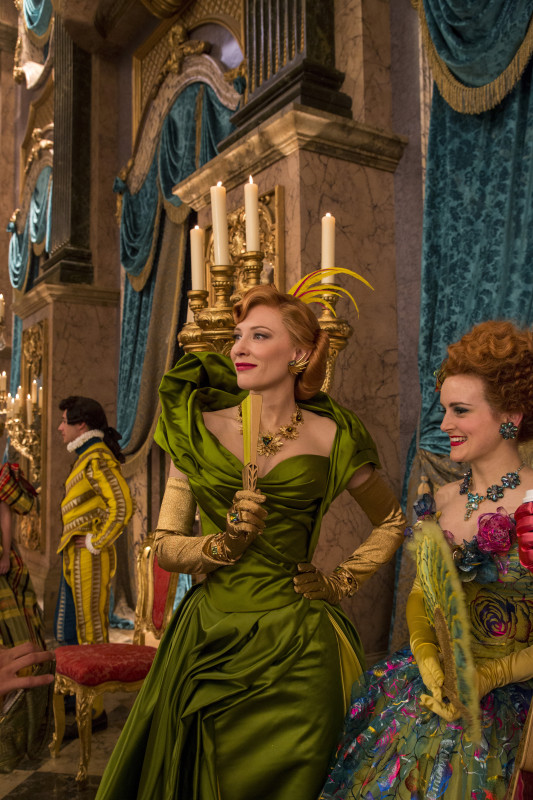 “Often on film, we don’t get a lot of rehearsal time. We got a little bit of  it with Ken on the script. But, you know, actors come in at various different times, and so for me, the, the most creative two parts of the process early on are your costume fittings so working with Sandy who I’ve worked with before and  we get to try things out because before you even utter a syllable,  what you wear and how we do it is what we form unconscious judgments of people. You know  the way they smell, by what they choose to wear; how you choose to present yourself, you know,it’s a big part of who we are, and particularly on film because it’s so visual, obviously. Once I  knew what those silhouettes were, I knew which bits I didn’t have to act because the costume was revealing of those things.”

Your laugh in the movie, I found that very iconic. Where  did you draw the inspiration for that laugh? 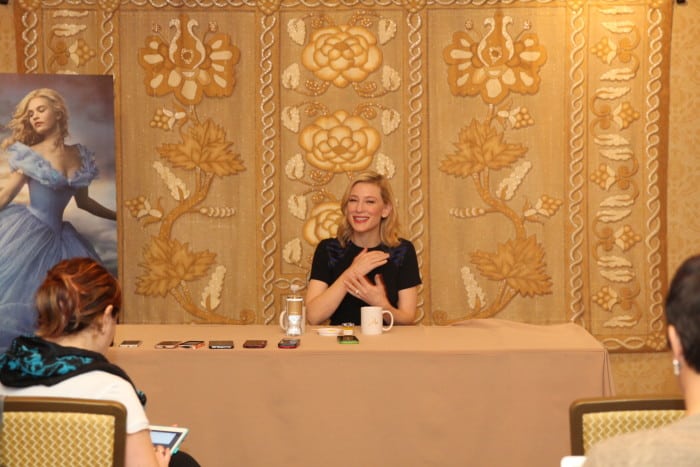 Well, I was mucking around with a, a, a friend of mine  on set and we were talking about, LAUGHS we were talking  what makes people ugly. And, and I said it’s interesting,  you can go out with somebody and think, oh my gosh,  you’re so attractive, and then he or she eats, and you think,  oh my gosh  you’re a pig,Or someone is amazing and you think, your politics are reprehensible, or you  know, there’s something about them will give them away, and we were talking about dirty laughs.  And so I just did it, and she laughed, and then there was a scene where gambling  and I I laughed, and Ken’s face was so revolted. He  was really worried. He said, you’re not gonna do that, are you? And I said, oh yes I am.  I think his reaction made me  wanna keep it.. It was a way in which she’s got exquisite dresses, perfect makeup, and then she opens her mouth and that comes out.  And so I thought  that was a bit of red flag about  was to come.”

Sitting down with Cate and talking about all these elements of the movie was such a treat. To get her perspective of a character that is so hateful was amazing. From listening to her you realize how much input she had in this role and how her touch was a crucial element to this character’s success. She manages to take the step mother’s role to the cruel step mother role we all know and in a sense make you realize why she is the way she is.

Cate Blanchett once again has proven the depth of her talent with this role and it was such a wonderful experience to spend some time talking to her about the many elements that went on in this movie. 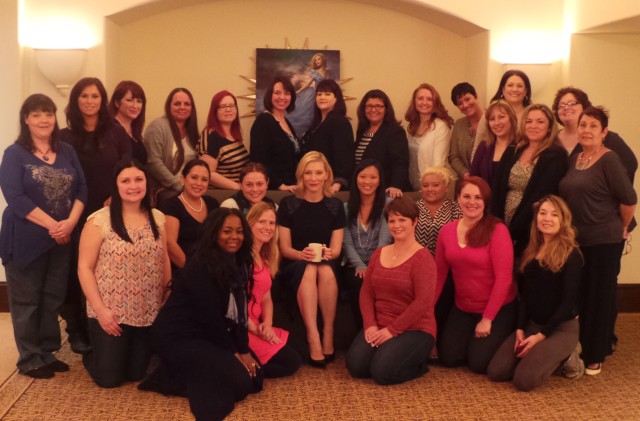