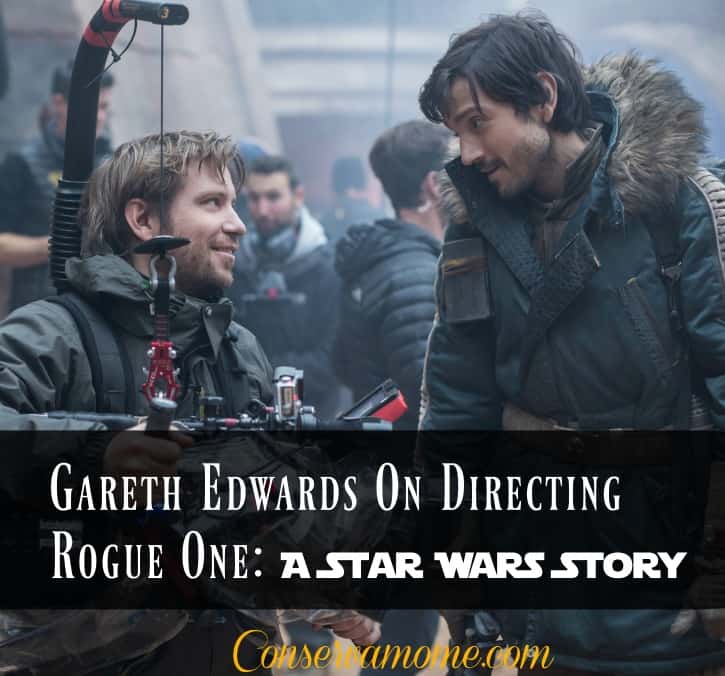 Gareth Edwards has been in charge of some pretty amazing stuff and has proven over and over how talented he is as a director. He got his start working special effects in channels such as BBC, Discovery and PBS. His big break came when he entered and won the Sci-Fi-London 48-hour film challenge, where a movie had to be created from start-to-finish in just two days, within certain criteria. From there it’s been nothing but up including having directed the movie Godzilla in 2011. However, his Pièce De Résistance hits theaters today, Rogue One: A Star Wars Story. Find out what he had to say when I sat down to interview him during our Rogue One Event.

I saw a featurrette about Rogue One a few months ago in which Gareth talks about how had he known he would be making this movie he would have planned for it his whole life. It’s no wonder when you think about it, Star Wars is the epitome of films. So when it was his turn to make this movie, you can imagine the excitement he felt. So of course the first questions I asked him when we sat down to discuss his process and thoughts on directing Rogue One was “What would he have done to plan for this if he had a crystal ball and knew he would be filming it”

He said : “I probably would have every single day been an nervous wreck, and not do any homework or schoolwork, and I probably would never have had a job, and I would have sat and prepared it for 30 odd years.  And then the day it began, I think I would have brought in everything saying okay, I know exactly what to do.  Uh, it starts off with this shot, and then becomes this shot.  And then I realize I would have wasted my entire life, because yeah.  I’m glad I didn’t because I think there’s something about the organic process of making a film, and working with others that if you don’t let it in… like, a dictatorship, like the Empire, and you say it’s gonna be this, this, and this, I don’t care what I see, I don’t care, you know, what the actors do.  It’s… This is what it’s gonna be, I think you limit how great the film… 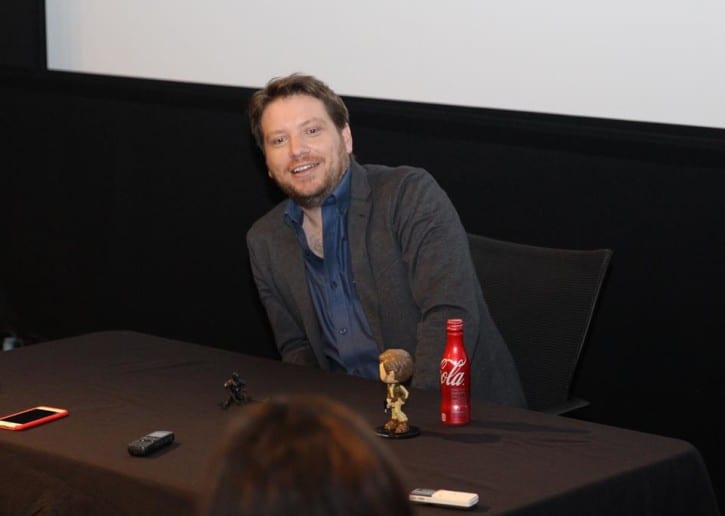 “Even though it was a massive, massive movie, and there’s all this pressure to have a, a specific plan, we were gonna keep it incredibly fluid.  And so we had 360 degree sets where we could, um, you know, film in any direction.  And I remember on day 1 in this, in this one set called,  Jedha, which is… one of the cities,that we go through where the force believers are, we started filming, and  the actors could do what they want.  And I just happened to pan left or something.  And there suddenly was all these crew in shot that suddenly ran out of frame,like, scared.  And then the next day we came, and The same sort of thing happened where I pan left.  And the crew were there.  But this time they’re all wearing Star Wars costumes.And so they’d all learned to put robes on and, and, and that way, wherever the camera went, they could be in it if they had to be they secretly loved that.  Like, there would be days where they would turn up with a rebel outfits, like rebel pilots.  And you’re going, why are you wearing that?  Well, in case you film us.  And it’s like, I’m not shooting that way.  And they’re like, well, it doesn’t matter.  You know… 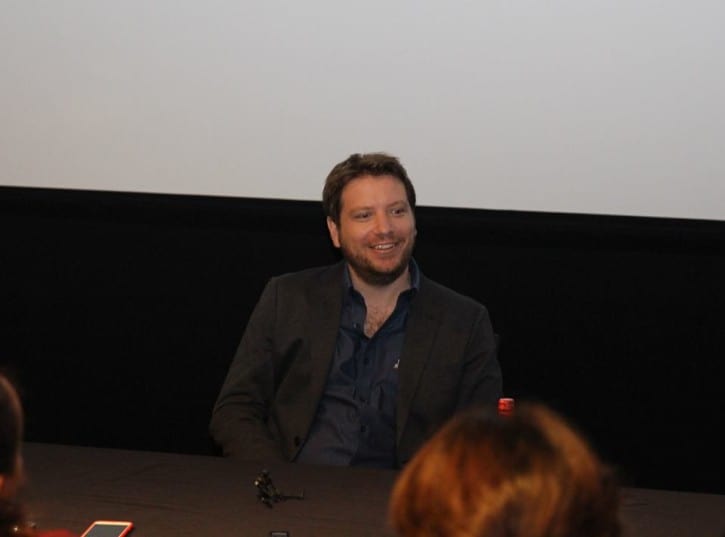 How difficult, or intimidating, was it to tackle a property like Star Wars knowing  the rabid fan base will scrutinize every word and action, and then how did you overcome that…

Gareth said “There’s a line in the original which I grew up watching every day, and definitely the reason I got into film making. It’s where Luke Skywalker  is doing the attack run on the Death Star through the trench and he’s got the computer,and  he turns it off, and it goes  week and  someone goes, Luke!  You’ve turned off your computer!  And he goes, it’s okay, I’m all right.  Like this.  It’s kinda like  he rusts the force.  And, and so literally you got to turn off your computer… And not look at the internet.  And just believe, like, you can bulls eye this.  You’ve just got to keep going!  And just, you know.  Everyone’s shooting at you. But just believe in yourself, and then… and then go for it.  And I think that’s… To me, that’s the takeaway from the original film was… Like, if you believe you can do something, and you never give up, then you can achieve anything.  And, uh… I guess I took it too literally.  Like, I want to make Star Wars films.  You know.  But… But for… It applies to everybody.  Like, people who do way more important things than me. 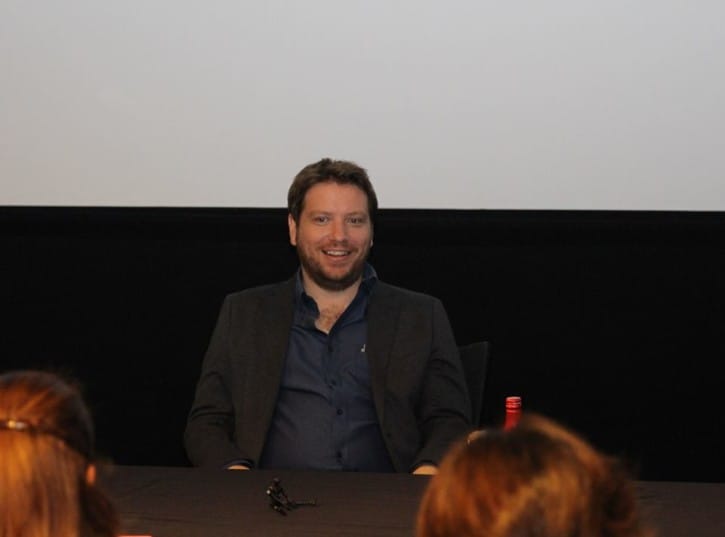 How did you go about choosing your cast?  Like, did you have specific people in mind?

“What happens is,  you try not to think of anyone to start with, ’cause you try and think about these characters.  And then it gets really difficult to keep talking about someone, and not being able to visually picture them.  And… And inevitably, you end up going you know, like so and so.  And sometimes they’re like, a character from a film.  You know, like so and so from that movie.  Or this, this person, and… And you start to take on specific people although I did have people in mind like Forest for I know definitely for things like Forest Whitaker as Saw Gerrera & Ben Mendelsohn  as Orson Krennic. They  just popped up straight away. I’ve seen Ben’s work. I thought  his film Animal Kingdom was one of the best films in a long time.  And then forgot about it.  And then watched, and then we watched Startup and I just came away that night going we’ve got to call this guy.  This guy  is Krennic.  We’ve got to try and get him.  And as I came into work, I was already, I’m gonna pitch this to the producer. I walked right into the office and he had also seen a movie of his and we both instantly said we wanted Mendelsohn as Krennic it was genuinely weird and we knew from that point on we weren’t going to take no for an answer. Thank God  Ben’s a massive Star Wars fan and he he agreed. 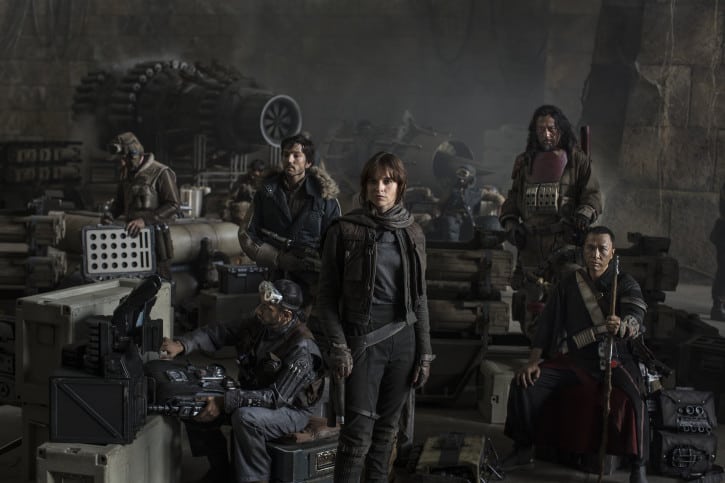 “The same thing happened with Forest, he has done amazing work outside of acting and a  phenomenal human being.  And I think just before we met, he’d just done a talk at the United Nations.  And you sort of feeling, like, I don’t really deserve to be kind of talking to this guy about…a role in, in, in a film, because… like, he’s the real deal.  And he’s incredibly humble and peaceful.  But you see him in his roles, and he can be intimidating and aggressive.  But…  He’s more like Yoda.  When you chat with him.  And in a way, Saw was a little bit like, you know, he represents the, the mentor in our movie.  So he’s like the Obiwan sort of Yoda type figure.  Um… And so it made a lot of sense.” 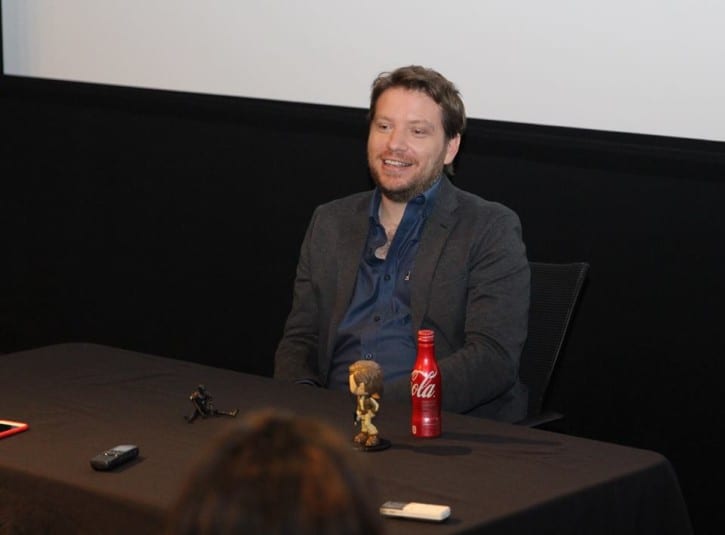 Gareth got his big break when after having worked for BBC & Discovery Channel he realized he needed to take a big risk and he quit his jobUm, being an old man, having never tried to do what I really wanted to do, which is [STAMMERS] was become a director.  And so I kinda quit my job and he made a film with five other people traveling Central America. He shot it,did all the visual effects and thought this was the best thing that could happen to him. He then got to show it at a special event but the film broke down half way thorough and it was a mess. He was devastated.However at the end a man came up to him with his business card and said ” I’d like to talk to you whenever you have a minute.” It turned out he was from an agent from Hollywood and he represented directors and wanted to represent him. Turned out he was also representing Quentin Tarantino and Tim Burton.    And from that day on, his life changed.

“So they go, okay, we’re gonna… We’re gonna make it happen.  And then, a few months later I was off at Godzilla, and things like that.  I don’t know how it really works.  I think if I had my life again, it would… I wouldn’t happen the same way.” 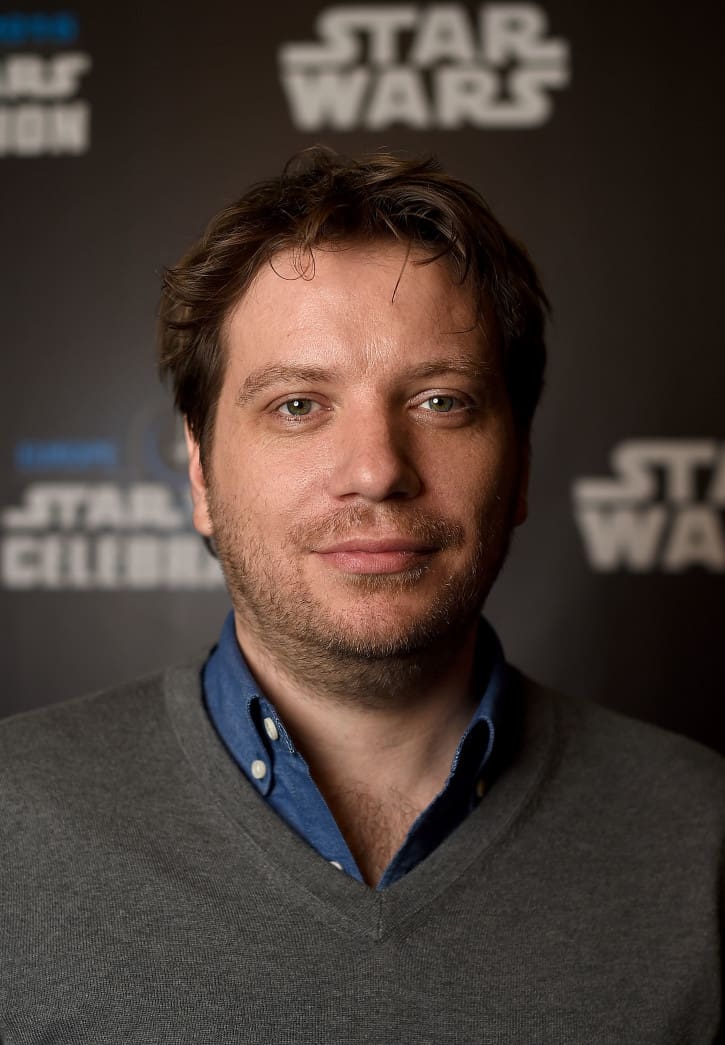 A lot of the scenes for the trailer and pictures came from stuff filmed on the last hour. Krenik in the white cape,  The planet and the Death Star, and even felicity going through the white tunnel. 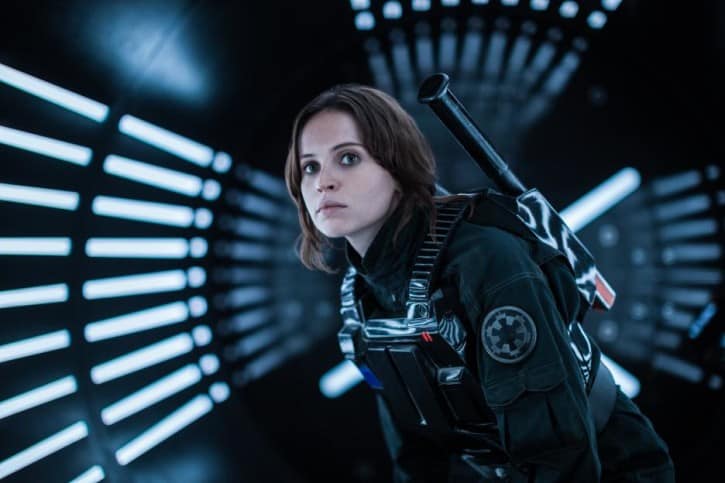 “Felicity going in as that thing where all the thing the tunnel lights up round her, as she turns around. That was the same sort of thing.  She walked in,We go okay and cut.  Okay, we’re getting her to do the next scene, and she walks into the tunnel, and as she walks into the tunnel, someone just turned the lights on.  And as she was walk in, I saw the lights are gone around her, and I was, like, oh my!  That looks really good!  And it was, like, stop, stop, stop!  And it was, like… And everyone goes, what?  And  I go  Hang on, we have to film this.  And it was like, no! It’s like, no, no!  We have to film this.  Okay, Felicity, do that again, but just look round as you do it.  And I promised everyone it would take, like, a minute.  And so we start rolling.  And obviously you’re like, okay, one more take.  Okay, one more take. And, like, an hour later, it’s like, okay.I think we got it.  And, uh… And And everyone’s like, well, where’s it gonna be in the film?  And you think, oh, I don’t know!  It just looked good.  And, and then, like, the trailers come in, and Disney show you, like, this is what we’re thinking for the trailer.  And these shots start turning up.  You go, oh, cool!  See? I did that. 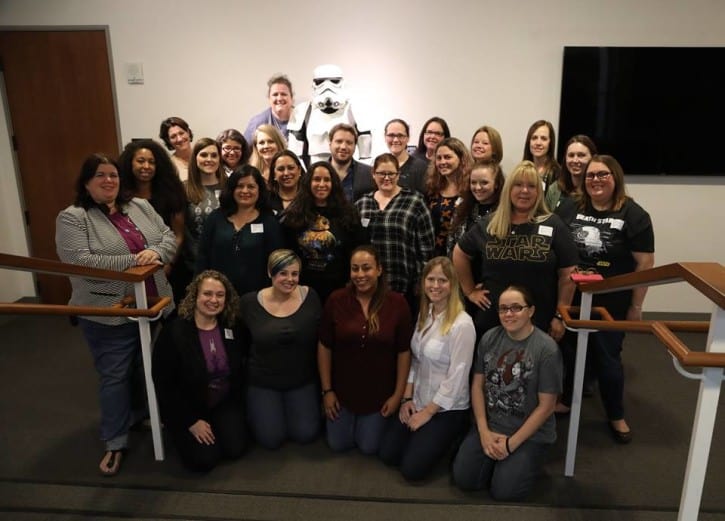 So thanks to Gareth’s flexibility this film is going to be one visual masterpiece. See Gareth’s Masterpiece in theaters today!! Check out this  fantastic Featurette to get you all sorts of excited!

ROGUE ONE: A STAR WARS STORY is now playing  in theaters everywhere as well as in In RealD 3D and IMAX 3D! 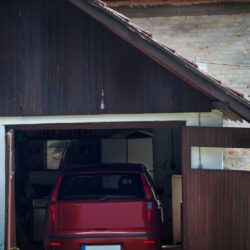 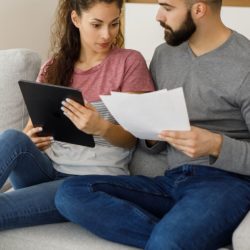 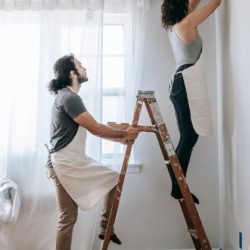