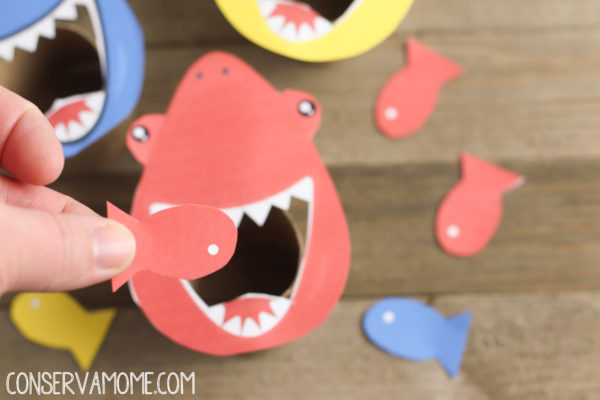 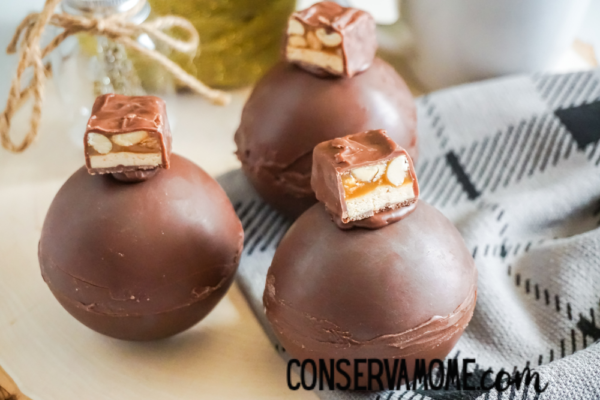 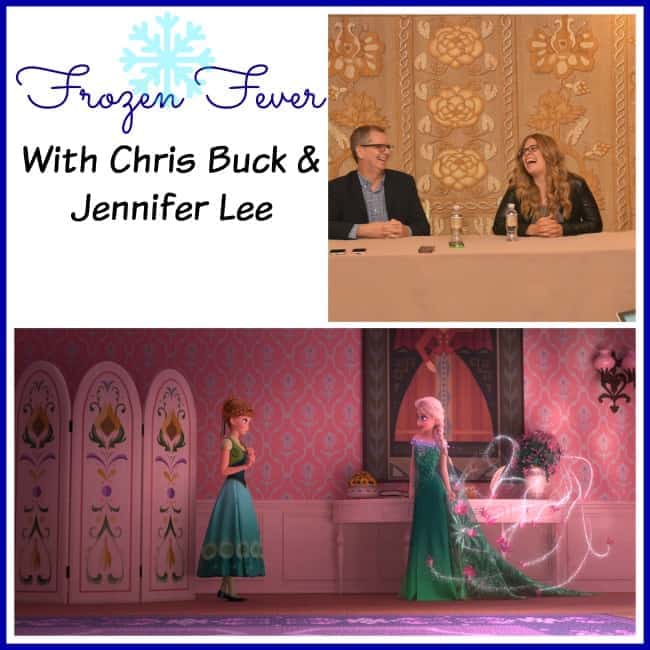 It’s been a year and some since the hit movie Frozen took the world by storm.  A movie that in many ways met an unexpected success but a very welcomed one especially for both Directors Chris Buck & Jennifer Lee. So it was a fantastic continuation to enjoy the new Feature short Frozen Fever which can only  be seen before Cinderella.

Last week while in LA I had the opportunity to sit down with Chris & Jennifer to talk about Frozen Fever along with some other great hints as to what’s to come with the Frozen franchise. Catch the preview of Frozen Fever below!

So it’s been a year. How are your lives now?

How are our lives now? Let’s see… we thought  they’d be less busy, but they’re not. So…

JENNIFER LEE:”I still find myself going I have to buy another dress? So. So yeah. So nothing’s changed, really.”

One thing we do still get after this overwhelming first year is Youtube videos sent to us. I mean, I got one just yesterday a mash-ups of Frozen and the thing.

Another  way their lives have changed is listening to  stories  of how Frozen impacted other people’s lives.

“A woman wrote in saying that she was in a bad place and was gonna commit suicide, and saw Frozen and inspired by Elsa and her journey and she said I’m still here. Thank you. There are autistic kids that watch Frozen that parents tell us they don’t sit still for anything, and they watch Frozen, and they relate to Olaf. Just a few weeks ago a friend of ours working at a nursing home said senior citizen wasn’t really doing much. And she watched Frozen. And then she started drawing again. Because she used to draw when she was younger. And she was drawing the Frozen characters. Her husband was just so grateful she was coming back to life. So you get those are the stories that we go oh wow. And that’s how I think our life has changed in that regards.
We always knew that these films had some influence and power. But this one certainly I’ve never experienced anything like this. So you it’s still a surprise every day.” 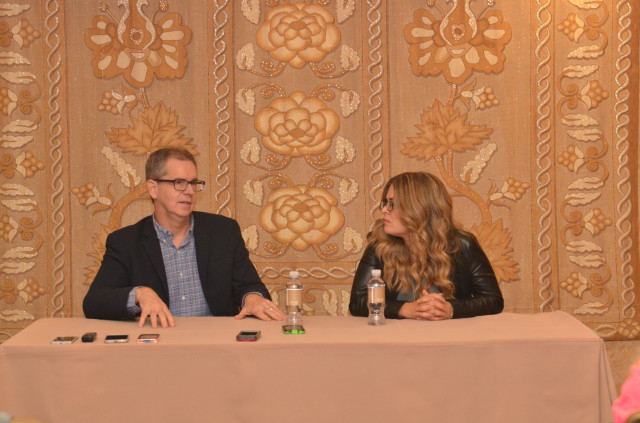 In  Frozen Fever short, Elsa sneezing is the cutest thing ever. How did you come up with that idea? Or who came up with the idea of her sneezing and snowmen come out?

We have this one  story artists, he was one of the head story artist on Frozen itself. And we were brainstorming
and we kept thinking It would be nice to focus on Elsa more,What’s she like now? We end the film & we had this tragic character and when we  end the film, she’s free, but we don’t know what’s next. So  we decided we’d love to play with her magic in a different way, and he just said what if she’s got  a cold, and the cold wreaks havoc and we  just went crazy with the idea. I mean, we  got ridiculous at some points It was just so much fun & it gave us license to have fun with Elsa,which was nice.”

Frozen Fever is a little hors d’oeuvre. What’s the future of Frozen and Elsa and Ana?

” We don’t know. We,just finished the short, like…Two weeks ago, finished the sound and didn’t have much of a break before we started on this. After the whirlwind of the feature.But we’re working on the Broadway musical as well as  at the parks and all that well.That’s why we’ve been busy. So we’ll  see what’s next.”

What brought you to Norway to? Why were you inspired by Norway?
“With The original one? Well, our art director, we knew it was  gonna be a Scandinavian area. Somewhere based on sort of Hans Christian Anderson. That was what inspired  us  originally, but Mike(one of the artist) was just going, through, books and books , internet stuff, too,and he was posting all these pages on Scandinavian, you know, beautiful scenery and architecture, and almost all the post-its were Norway.  So he said okay. Well, you know, we need our trip to be to Norway. Now we don’t say that it’s set in Norway. But,It helps to have something specific to kind of draw from. So it makes the world very believable. Basing it in  Norway, gave us ideas  we’d never have come up with on our own, the stave church, which was very beautiful. The design and real warmth and intimacy to the villages, and then when you get out to the vast Fjords, the contrast is great. So it really just lent itself to this beautiful extreme.  We were very loosley inspired by Hans Christian Anderson, we knew the Snow Queen is a very compelling idea but, you in the book she’s evil, and you know nothing about her. I watched the making of Rosa, and so I learned about how Walt Disney had always wanted to do The Snow Queen.

Did you have any direction from Walt? Or anything that he had kinda toyed with through the years?

No, not really. There weren’t any transcripts of the early story sessions they may have had.They didn’t go too far with it.

So from beginning to end, how long did it take For the short?
We  started brainstorming in June with the idea of Elsa getting a cold and all that.
So pretty much June through…two weeks ago and it takes place 11 months later. Production-wise, like when we started animation or layout, it was probably August.

We remember the first day in animation when we saw, I think it was an Elsa shot that came in, and seeing her alive again, it was an amazing feeling.I don’t think we expected that feeling. I think we were kind of, like, okay we were a little numb,but we weren’t.

It seems like you revisited Ana waking up with that, like, let me see your hair… Was there a reason? Was it something that a lot of people enjoyed that scene that you just, like…

I have to say, it was something  because growing up I always looked at how a lot of these fairy tales had lead female characters waking up all perfect. So we decided to do something a little more realistic. There’s even a little bit of drool. That was for Chris because I don’t drool (Jennifer)

There is one. I don’t think we want to say yet or  if we can say it. You have to find it,it’s a Disney character. You’ll just have to find him or her.  You know, there might be more, sometimes the animators put in things that we don’t necessarily see, or they won’t tell us. It’s usually comes from  the animators. They do it for fun and sometimes they’ll point it out because they need approval. And other times we’ll just be like, oh! Did you know there was a Mickey on that shelf?

So Are we gonna see…any of those little snowmen merchandise…

Oh yes you will  I think right before it, opens, so… the 12th or 13th .They’re not only are adorable,but they talk. Well what they do is there’s a, a recording box in there. So you talk to it and it talks and it repeats what you say, but in a higher pitch…

Also with merchandise we didn’t have expectations set. So I know there was not enough product in this time. They just asked when’s the date? I think there will be stuff out there. But once we knew that Elsa’s gonna create a couple new dresses, then Mike & John Lee Archer had to really work on those quickly and get the designs done so that we could get stuff in the store.

Kristoff finally told Ana that he loves her. Is that like a little open for a wedding maybe?

Can you talk about the Broadway musical that’s coming up?

We’re in the very early stages. I mean, there will be more songs  Bobby and Kristen, of course, have a lot more to do with, with that than I do in that Broadway musical tends to have the opposite structure where a film has 20 to 25 minutes of song, and is scenes. A musical flips that. So, you know, there will be lot of great stuff coming, but we’re really just getting started.

If you could sort of talk about, Frozen Fever’s attached to Cinderella, and if that….means anything, you know, for you guys.

Jennifer: Well, I have to say it’s huge for me because my first Disney film was Cinderella. And then once it came out  on VHS, I think I played it 50, 60 times. Then I began working for Disney and that was a dream  when I was a kid. So to have everything come together with the film.  I was also blown away by how much of this film is in line with the animated film. And yet it went even deeper and  it was so beautiful. So there were a lot  very nostalgic tears last night at the premier.

As you can see it was a real treat to sit down with Chris and Jennifer to talk about the in’s and out’s of the film. Being in the room with the two of them you realize quickly how much fun it working with them could be. With two fun and creative personalities its no wonder they’ve created gold with Frozen & Frozen Fever. 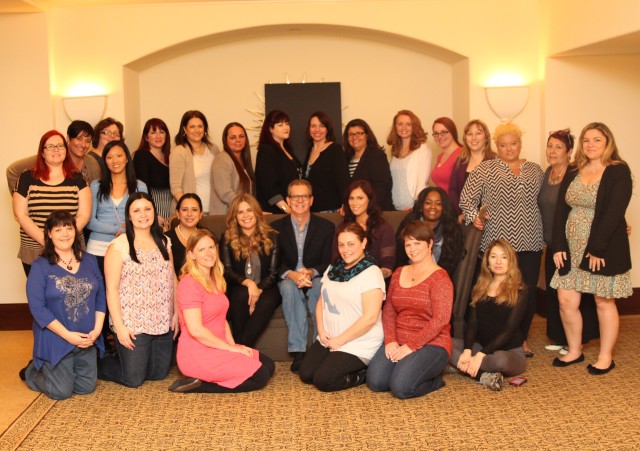 The only way to see Frozen Fever is before  Disney’s Cinderella opening in theaters everywhere this Friday March 13th. So don’t miss out!