Hormonal contraception May Shrink Portions of the Brain 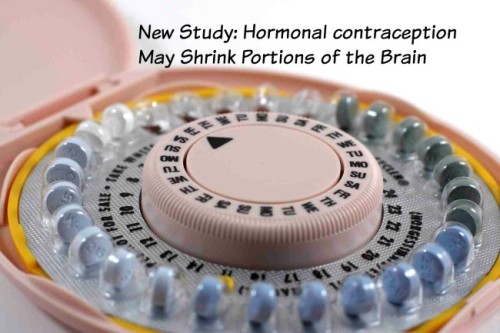 According to a new study ,Birth Control May Alter The Structure Of A Woman’s Brain. The study was  published in the journal Human Brain Mapping. The study took place on  90 women, in which  neuroscientists at UCLA found that two key brain regions, the lateral orbitofrontal cortex and the posterior cigulate cortex, were thinner in women who used oral contraception than in women who did not.

The lateral orbitofrontal cortex plays an important role in emotion regulation and responding to rewards, while the posterior cigulate cortex is involved with inward-directed thought, and shows increased activity when we recall personal memories and plan for the future. This is interesting because of how many women are affected emotionally by taking Hormonal Contraception.

According to a Huffington Post Article “Some women experience negative emotional side effects from taking oral contraceptive pills, although the scientific findings investigating that have been mixed,” Nicole Petersen, a neuroscientist at UCLA and the study’s lead author, told The Huffington Post. “So it’s possible that this change in the lateral orbitofrontal cortex may be related to the emotional changes that some women experience when using birth control pills.”

Scientists have not yet determined if these neurological changes are permanent, or if they only last while a woman is on the Pill. Either way this is not good news because of how delicate the brain is.

Oral Contraceptives have been in the news recently for many negative side effects such as Increasing the Risk of Breast Cancer and even occurrences of rare brain tumors.   Whether it’s the news or women trying to take a healthier alternative to their Birth Control needs many women are starting to opt for more natural family planning options.

It’s important to research the effects that these contraceptives have not only on our bodies before committing to use.